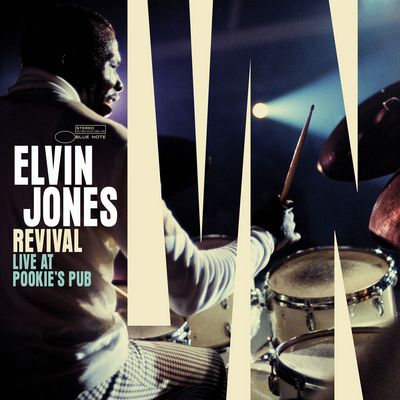 Recorded live at a small New York City venue, Revival: Live at Pookie’s Pub captures drummer Elvin Jones and his quartet in several sweaty, intensely delivered performances recorded over a three-day period in 1967. This was a year after Jones had left John Coltrane’s storied quartet and launched his own influential group with tenor saxophonist/flutist Joe Farrell, who is featured prominently here. Joining them are pianist Billy Greene and bassist Wilbur Little, both regular members of Jones’ ensembles in the late ’60s. With his roiling, tidal wave-like drum style, Jones was easily one of the most distinctive and immediately recognizable players of his era. His playing was as much a defining aspect of the sound of ’60s modal jazz and post-bop as Coltrane’s. It’s that vibe he carried forward with his own group, bringing along the advanced harmonic devices and kinetic group interplay he championed with Coltrane, as well as a passion for lyrical jazz standards, and originals that prefigured the funk and blues explorations of the ’70s. Farrell is an absolute monster here, tearing his way through a 16-minute version of his angular blues “13 Avenue B.” The band throw more fire on their off-the-cuff rendition of Jimmy Heath’s “Gingerbread Boy” featuring Larry Young; the organist clearly showed up at the gig and it’s fascinating to hear him apply his ringing organ chords to the piano. We also get a crackling takes on the Jones original “Keiko’s Birthday March” (dedicated to his wife), composer Ferde Grofé’s Western-themed “On the Trail” (the bar owner’s favorite as Jones says), and a delicately rendered “My Funny Valentine” (marked by Farrell’s luminous flute). While the late-’60s post-bop aesthetic was often deeply intellectual, Jones could groove as he does on Frank Foster’s “Raunchy Rita,” a song he recorded a year prior with bassist Richard Davis on Heavy Sounds and which he pushes with a raw, dance club swagger here. ― Allmusic