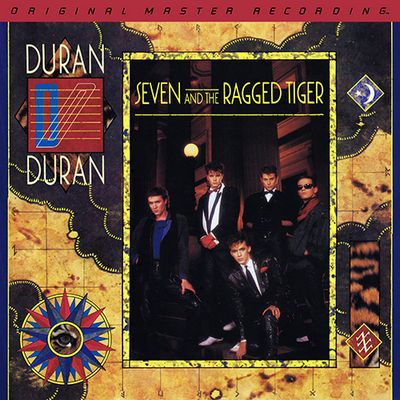 Despite the fact that Seven and the Ragged Tiger couldn’t match the unrestrained pop/rock ebullience of 1982’s Rio, Duran Duran put three of the album’s singles in the Top Ten, taking it to number one in the U.K. Even though “The Reflex” gave the band their first number one hit, there’s an overabundance of fancy glitz and dancefloor flamboyancy running through it, unlike “New Moon on Monday”‘s straight-ahead appeal or “Union of the Snake”‘s mysterious, almost taboo flair. It’s apparent that Seven and the Ragged Tiger’s content has the band moving ever so slightly into a danceclub arena, with the songs leaning more toward their ability to produce a sexier sound through electronics and instrumentation than through a firm lyrical and musical partnership. Even the unreleased tracks trade Duran Duran’s handsome edginess for a shinier sound, heard mainly on “I Take the Dice” and “Cracks in the Pavement.” It’s here that Lebon and Taylor’s personalities begins to get overshadowed by the demand to produce a more synth-snazzy and fashionable style of music. Although they may have turned their songwriting down a notch in order to succumb to the pabulum of synthesized pop, they didn’t relinquish every aspect of their genius, and when they do deliver, it’s bright, energetic, and effectual. Duran Duran’s new direction eventually gave Seven and the Ragged Tiger double platinum status. ― Allmusic