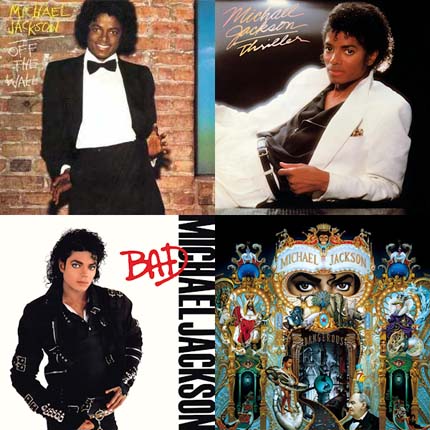 Michael Jackson wasn’t merely the biggest pop star of his era, shaping the sound and style of the ’70s and ’80s; he was one of the defining stars of the 20th century, a musician who changed the contours of American culture. A preternaturally gifted singer and dancer, Jackson first rose to stardom in 1969 as the 11-year-old frontman for his family’s band, the Jackson 5. As remarkable a run as the Jackson 5 had — at the dawn of the ’70s, each of their first four singles went to number one and they stayed near the top of the charts for the next five years — it all served as a preamble to Jackson’s solo career. Off the Wall, the dazzling 1979 album co-produced by Quincy Jones, announced Jackson as a mature talent, and the singles “Don’t Stop ’til You Get Enough” and “Rock with You” turned it into a blockbuster. Despite its success, Jackson believed Off the Wall was pigeonholed as an R&B record. Determined to break through this glass ceiling, he reunited with Jones to create Thriller, the 1982 album that shattered every music record on the books. Thriller was designed to appeal to every audience and its diversity was evident by its guests: he enlisted Eddie Van Halen to play guitar on the hard rock of “Beat It” while inviting Paul McCartney to duet on the chipper soft pop tune “The Girl Is Mine.” Jackson also expanded the horizons of soul and dance music, producing pioneering masterpieces like “Billie Jean.” This single provided Thriller with its 1983 breakthrough, thanks in part to its groundbreaking music video, which became the first clip from a black artist to enter steady rotation on the fledgling MTV. Jackson’s smashing of the network’s racial barriers was only one aspect of Thriller’s unprecedented crossover. Seven of its nine songs were Top 10 hits, it earned eight Grammy awards, and topped the Billboard charts for 37 weeks, matching its American success internationally to become the biggest-selling album of all time, earning 32 platinum certifications in the US and moving over 100 million albums worldwide. Such a phenomenal triumph pushed Jackson into the stratosphere and Bad — the eagerly-anticipated 1987 sequel to Thriller, co-produced once again with Quincy Jones — kept him there, generating five number one singles on the Billboard charts and selling 30 million copies internationally, two thirds of which were outside of the US. Jackson parted ways with Jones for 1991’s Dangerous, another global blockbuster. HIStory, a 1995 double-disc set that paired a disc of hits with a new album, produced a couple of international number one singles. Invincible, his 2001 album, turned out to be his last. Health problems culminated in his untimely death in the summer of 2009, but at that point Jackson’s legend was safe: he stood alongside Louis Armstrong, Frank Sinatra, Hank Williams, Elvis Presley, Miles Davis, and Bob Dylan as one of the musicians that created the sound of America in the 20th century. ― Allmusic