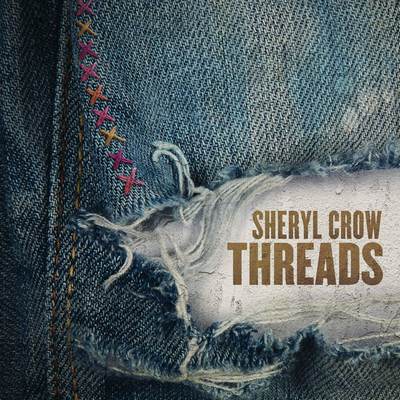 Teased upon its release as Sheryl Crow’s final album — a promise that seems perhaps a tad premature for an artist who was just 57 upon the record’s release — Threads is intended as a summation of her musical worldview. Specifically, it’s designed to draw connections between Crow, her idols, and the generations who followed her, all through a variety of covers, collaborations, and duets. The cast of characters is formidable, encompassing titans and hipsters along with a host of musicians who are happy to cruise along in the middle of the road. Crow often found herself in that cozy MOR, an adult contemporary-adjacent positioning that tended to undersell her sense of adventure and craft. Threads touches upon both aspects, albeit to different degrees. The adventure crashes to the forefront with the booming presence of Chuck D on “Story of Everything,” and simmers on her collaborations with St. Vincent (“Wouldn’t Want to Be Like You”) and Lucius (“Don’t”), two artists who are associated with an indie world where Crow never quite belonged. As alluring as the dreamy girl group sway of “Don’t” is, Crow seems more at home when she’s standing toe-to-toe with Nashville’s new generation — Maren Morris and Jason Isbell are both here, with Chris Stapleton bridging the gap between country-pop and Americana — or sharing space with legends who’d amassed a vast catalog long before Tuesday Night Music Club appeared in 1993. Some of this can veer toward the fusty — it’s hard to call a duet with Joe Walsh, where they claim it’s “Still the Good Old Days,” anything but that — it’s saved by good cheer and her sharp sense of craft. These two qualities give “Prove You Wrong,” sung with Morris and Stevie Nicks and co-written with Al Anderson, a clean punch, makes the swampy Stapleton collaboration “Tell Me When It’s Over” feel like an unearthed gem from The Globe Sessions, and gives the Willie Nelson duet “Lonely Alone” a sense of bruised beauty. Many of the covers also benefit from the slick professional chops of Crow and her friends; Brandi Carlile plays with her phrasing on a reading of George Harrison’s “Beware of Darkness,” while Jason Isbell helps kick Bob Dylan’s “Everything Is Broken” into a boogie. Such little grace notes are abundant on Threads but, then again, there’s an abundance of everything on Threads. Running a leisurely 75 minutes, Threads doesn’t seem sequenced so much as unedited; it’s as if instead of finishing the album, she decided to dump every track out into the marketplace. This makes for a somewhat somnolent record, but it’s better to think of it as not a complete meal but rather a buffet that contains something to please every palette. ― Allmusic