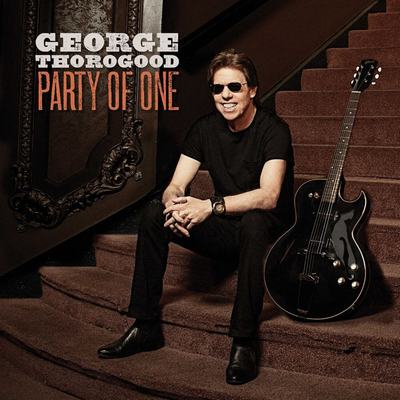 Essentially, George Thorogood has spent most of his career making the same sort of album over and over again, and if anyone knows how to put together a solid set of barroom-friendly, beer-drinking, hard-rockin’ boogie blues, it’s him. But on his 14th studio album, Thorogood has decided to change things up; Party of One marks the first time he’s made an album without his band the Destroyers, and here he plays a set of blues, country, and folk covers with only his own guitar and harmonica for accompaniment. Thorogood brings out his electric guitar for a few cuts, but most of Party of One is just George and his acoustic, and the bulk of this sounds like it was recorded live in the studio, with the occasional flubbed note left in the mix. Thorogood began his career as a street busker, and in a way, this album plays as a guide to his earliest (and strongest) influences, with several John Lee Hooker tunes dotting the set list along with classic numbers by Willie Dixon, Elmore James, Robert Johnson, and the Rolling Stones, as well as less expected contributions from Hank Williams, Johnny Cash, and Bob Dylan. The tracks where Thorogood cranks up his amp and gives the tunes his trademark buzzy, growling tone are the most effective, or at very least find him doing what he’s always done best. Thorogood is somewhat less deft as an acoustic guitarist, though despite the occasional missed note he generally fares well unplugged, and while he sometimes strains to hit the high notes, as a vocalist he displays a genuine love for the material and his passion overcomes his limitations. Party of One suggests Thorogood has had his greatest success playing rowdy electric blues-rock for a reason — it’s clearly his strong suit — but 40 years after the release of his debut album, the guy is more than entitled to a change of pace. As a look back at his roots as well as a detour into more subtle territory, it’s an experiment that succeeds far more often than it fails. ― Allmusic