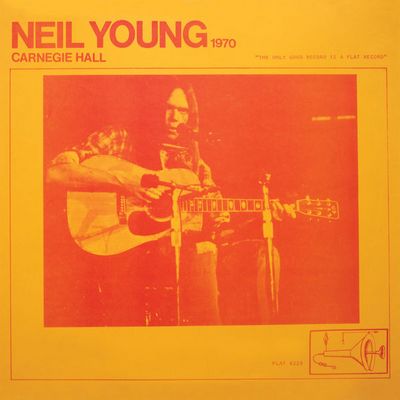 Neil Young had just released his third solo album After the Gold Rush a few months before he played Carnegie Hall in December of 1970, where he offered up a new set of introspective songs that were relatively toned down when compared to the stomping full-band jamming of 1969’s Everybody Knows This Is Nowhere. This would just be the beginning of a run of classic albums that continued throughout the ’70s, and both sides of Young’s musical personality — the hushed and patient songwriter side, and the side that tended toward rugged rock — were integral to how that peerless run played out. Young appeared alone on-stage at Carnegie Hall, playing stripped-down versions of his songs on acoustic guitar and piano to an audience so rapt they remained completely silent even as he took his time tuning the guitar and bantering between songs. He played two nights at Carnegie Hall, and while audience recordings of the second show found their way onto various bootlegs over the years, no bootlegs were ever made of the first night. Carnegie Hall 1970 offers the first public release of multi-track recordings from that first night, finding Young in rare form and delivering a diverse set list that included material from his records up to that point, as well as tunes that hadn’t been released yet. Songs that were raging and blusterous on record, like “Cinnamon Girl,” “Southern Man,” and “Cowgirl in the Sand,” are mysterious and tender in their solo renditions, peeling away the distortion and guitar heroics to expose the lingering melancholy and aching beauty that so often lie at the core of Young’s songwriting. Already, folksy acoustic songs like “Tell Me Why,” and the piano-based “Birds” take on an even more marked intimacy on Carnegie Hall 1970. Young’s legendarily quaky voice conveys the loneliness, hope, loss, and appreciation of his lyrics with a profound impact when he stands alone with a single instrument. Die-hard fans will want to listen closely to versions of “See the Sky About to Rain,” “Old Man,” and “Bad Fog of Loneliness,” all of which had yet to be recorded and commercially released at the time of these performances. It speaks to the creative streak Young was in the thick of at that time (and would continue in various forms for the majority of his career) that he was already tired of playing his groundbreaking songs that were only a few years old and was eager to get the next ones out. Any Young completist will need Carnegie Hall 1970, but it’s a special performance that can be appreciated by more casual listeners as well. Alone at the microphone, the purity, simplicity, and one-of-a-kind magic of some of Neil Young’s best songs come into view in a way that’s undeniable. ― Allmusic