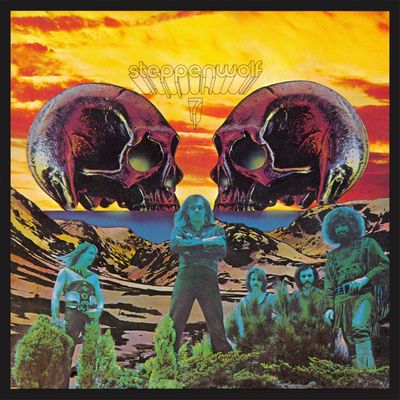 Steppenwolf only recorded seven discs for Dunhill Records in the short span between 1968 and 1971, six of them studio albums, and one allegedly “live” — though there was early Sparrow material recorded in May of 1967 not released by the label until 1972. Throw in a greatest-hits package along with Columbia’s reissue of yet more Sparrow recordings, and how they came up with Steppenwolf 7 for the title of this, their fifth studio recording for Dunhill, is a question for hardcore fans of the band to debate (don’t even bring the movie soundtracks into this equation). Richard Podolor has taken the production reins from Gabriel Mekler, as he did with Three Dog Night, but where the producer was able to take Hoyt Axton’s “Joy to the World” to number one in a notable six weeks in 1971 with the vocal trio and labelmates of this group, the author of “The Pusher,” Axton, is represented here by his “Snowblind Friend,” a topic not likely to get Steppenwolf chart action. And that’s the dilemma with Steppenwolf 7. This is a very worthwhile Steppenwolf recording, chock-full of their trademark sound, but nothing that was going to penetrate the Top 40. John Kay and guitarist Larry Byron (listed on the song credits as Larry Byrom and on the live album as Byron — take your pick, he’s a notable session player) co-write five of these nine tunes, “Ball Crusher” being what you expect, as is “Fat Jack,” Byrom’s only co-write here with new bassist George Biondo (and perhaps one of them on the vocals, as it certainly isn’t John Kay). A nice, thick Goldy McJohn keyboard and solid beat still don’t give this tune enough of an identity to be considered hit material. Kay and Byrom do a better job of heading in that direction with their “Foggy Mental Breakdown” and “Hippo Stomp,” while Byrom’s instrumental, “Earschplittenloudenboomer,” had the attitude to be the next “Born to Be Wild,” just not enough of the magic — not explosive enough and no sneering Kay vocal to bring it home. What is happening here is that John Kay is heading in the direction of his 1972 solo disc, Forgotten Songs & Unsung Heroes, especially on the cover of Roth’s “Forty Days and Forty Nights” and the country-ish “Snowblind Friend,” which is the other side of Hoyt Axton’s “The Pusher,” the effect of cocaine on the victim/user. Kay and Byrom come back with more driving rock in “Who Needs Ya?,” played well and listenable, but just missing the edge that gave “Rock Me” and “Magic Carpet Ride” their specialness. The blueish images of the bandmembers in a desolate area with two skulls above them on the album cover make an interesting statement. Steppenwolf 7 is an intriguing collection of album tracks showing the two sides of John Kay — the hard rock singer and the artist setting his sights on interpreting other musical styles. It came at a moment when the band needed to redefine itself on the AM band, but opted instead to just put out a decent product and take few risks. ― Allmusic