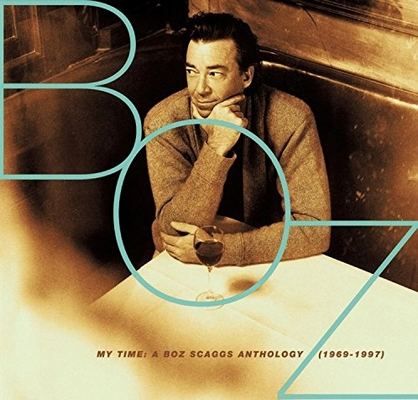 In his liner notes to the double-disc, two-and-a-half-hour Boz Scaggs compilation My Time: The Anthology (1969-1997), Ben Fong-Torres writes, “There are those who, charting Boz’s career, identify specific phases: rock and roll with [Steve] Miller; the early solo albums, which were as much country and blues, and pop and jazz, as they were rock; the Slow Dancer/Silk Degrees stage, of Boz as sweet soul singer; the nearly decade-long retrenchment and semi-retirement, and the return to rootsy blues and R&B in Some Change and Come On Home.” Fong-Torres goes on to say that this is not an incorrect way to describe Scaggs’ career, but that there is more unity than it would imply: “in every phase of his career, he has remained faithful to his musical instincts.” Fair enough, and that unity is reflected in the compilation, which shows that, with slight variations, Scaggs has always been interested in what might be called an evolved version of the Chicago blues, augmenting his rock sound with horn charts and prominent female background vocals, all in support of his adenoidal tenor voice. But most people would make a far simpler division in his career, between the early, harder rocking period (1968-1972) and the smooth R&B/disco period (1974-80), when he scored major hits with the singles “Lowdown” and “Lido Shuffle” and the multi-platinum album Silk Degrees. While including most of his chart singles (the exceptions are the minor hits “Hollywood” and “Cool Running”), the compilation attempts to de-emphasize that distinction, probably because he had much more critical respect in the earlier phase than in the later one. This is accomplished by a striking example of sequencing legerdemain. In a collection that is otherwise roughly chronological, disc one ends by following the Silk Degrees selections recorded in 1975 with “Loan Me a Dime,” a 13-minute blues workout from 1969 that prominently features Duane Allman. Aurally, the suggestion is that whatever you may think, Scaggs didn’t sell out to disco. It would have been nice if the compilers had trusted his musical instincts as much as the annotator does. That said, the collection is generous and presents most of Scaggs’ major recordings across record labels, including tracks recorded for Atlantic, Columbia, Giant, and Virgin. ― Allmusic