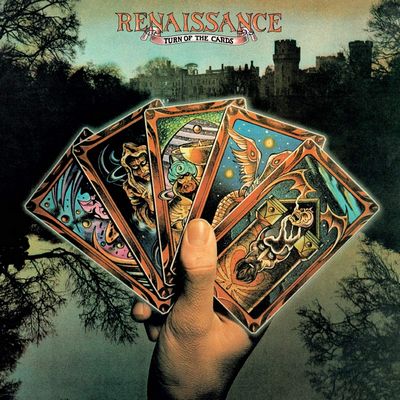 Esoteric Recordings America is pleased to announce the release of a newly re-mastered and expanded four-disc clamshell box edition of the classic album, TURN OF THE CARDS by RENAISSANCE. Released in 1974, the album was an artistic triumph and heralded the band’s commercial breakthrough in the United States. Featuring highly gifted vocalist Annie Haslam, Michael Dunford (acoustic guitars), John Tout (keyboards, vocals), Jon Camp (bass, vocals) and Terry Sullivan (drums, percussion), TURN OF THE CARDS was recorded in March 1974 at De Lane Lea studios in Wembley , North London and featured the band incorporating symphonic orchestral arrangements into their material extensively on classic pieces such as ‘Running Hard’, ‘Things I Don’t Understand’ and ‘Mother Russia’. The album would also feature the evocative ‘Cold is Being’ and the celebrated ‘Black Flame’ which would result in TURN OF THE CARDS being praised as one of the finest works by Renaissance. This expanded edition has been newly re-mastered from the original master tapes and also features an entire concert at The Academy of Music in New York City on 17th May 1974 (with a 24-piece orchestra) over two bonus CDs which has been newly mixed from the original 16-track master tapes, including live versions of songs from the album, along with classics such as ‘Can You Understand’, ‘Carpet of the Sun’, ‘Prologue’ and a 25 minute version of ‘Ashes Are Burning’ featuring guest ANDY POWELL (of WISHBONE ASH) on lead guitar. The fourth disc is a DVD (NTSC / Region Free) which features a new 5.1 Surround sound and high-resolution stereo mix of TURN OF THE CARDS. ― Amazon