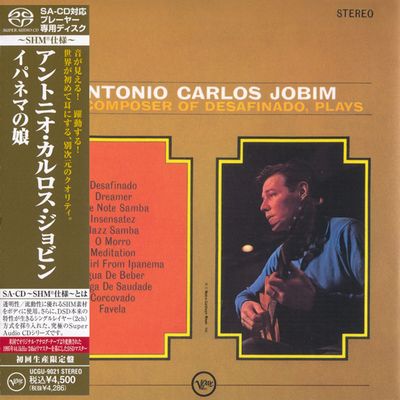 In his first American album, Antonio Carlos Jobim presents a dozen of his songs, each one destined to become a standard — an astounding batting average. Jobim, who claimed to have been out of practice at the time of the session, merely plays single notes on the piano with one hand, punctuated by chords now and then, sticking to his long, undulating melodies with a few passages of jazz improvisation now and then. Yet it is a lovely idea, not a gesture is wasted. Arranger Claus Ogerman unveils many of the trademarks that would define his Creed Taylor-produced albums with Jobim — the soaring, dying solo flute and spare, brooding unison string lines widening into lush harmony; flutes doubling on top of Jobim’s piano chords — again with an exquisitely spare touch. The songs include “Desafinado,” “Corcovado,” “Chega de Saudade” (No More Blues), “The Girl From Ipanema,” “Meditation,” “One Note Samba,” and half-a-dozen others (every one of which is included on The Man From Ipanema set). ― Allmusic