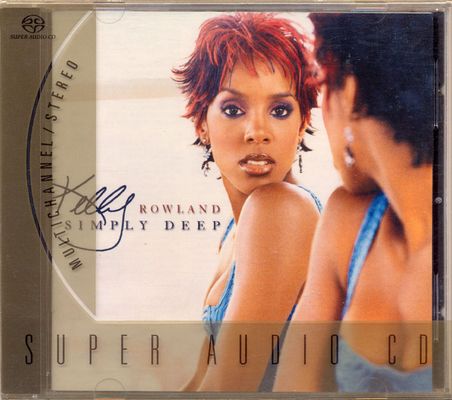 It seems hard to believe now, but at the beginning of 2003, it appeared that underdog Kelly Rowland might usurp her fellow Destiny’s Child member Beyoncé in the solo career stakes, having scored a U.S. chart-topper and a U.K. number one album shortly after her bandmate’s Austin Powers-related “Work It Out” failed to even make it into the Billboard Hot 100. Of course, time has shown that this surprising role reversal only ever lasted a mere six months, but while “Crazy in Love” might have blown any comparisons out of the water, its parent album didn’t exactly produce the whitewash expected. Indeed, take away the Chi-Lites sampling booty-shaker and there isn’t much difference in quality between Dangerously in Love and Rowland’s first offering, Simply Deep. Like the former’s early uptempo nature, the latter’s 14 tracks start promisingly with the rock-tinged “Stole,” an emotive tale of school shootings and suicides, the Patti LaBelle-sampling Nelly duet “Dilemma,” and the clattering percussion of “Can’t Nobody.” But other than the Timbaland-esque staccato R&B of the Brandy-penned “Love/Hate,” and the sleek disco-funk of “Past 12,” the album soon becomes bogged down with the kind of gloopy, forgettable ballads that also dominated Beyoncé’s debut. The likes of finger-clicking slow jam “Haven’t Told You,” twinkling nu-soul number “Heaven,” and the Solange-featuring title track are all slickly produced, allowing Rowland’s soulful and seductive vocals to come to the forefront for a change, but they’re so utterly generic that they could have been lifted from several of her fellow young urban divas’ output, with only the gorgeous “Train on a Track,” an acoustic-driven lament to the first flourishes of love, and the chugging guitars and mournful strings of “Beyond Imagination,” deviating from the late-night slow jam pastiche formula. Having been recorded over just three weeks in order to capitalize on the success of “Dilemma,” Simply Deep does sometimes have the feel of a “will this do?” rush job, but skip past the schmaltzy filler and there are several flashes of inspiration which are more than worthy of sitting alongside the highlights of Beyoncé’s back catalog. ― by Allmusic