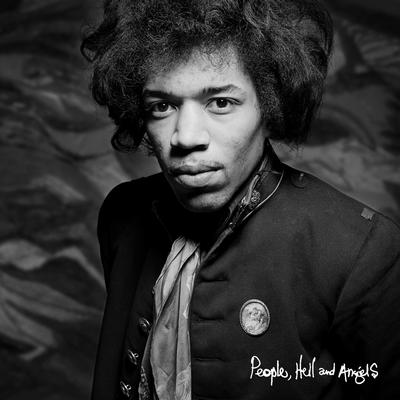 People, Hell and Angels is a collection of quality studio tracks recorded (mostly) in 1968-1969 as the Experience was coming to an end and Jimi was renewing his friendships with Billy Cox and Buddy Miles, who appear here as sidemen on most of these tracks. The surprising thing about this set is not the sound quality (which is exceptional) or that these all sound like finished tracks, but the fact that even avid Hendrix bootleg collectors are unlikely to have heard most of this material.

A great version of “Earth Blues” kicks things off with just Jimi, Billy, and Buddy (whose drums were replaced by Mitch Mitchell on the Rainbow Bridge/First Rays version). It’s a more forceful take than the other version and also has some different lyrics. “Somewhere” is also a different take than the one used for Crash Landing and, of course, contains the original rhythm section and not the egregious overdubs of Crash Landing. “Hear My Train A Comin'” and “Bleeding Heart” are both taken from Jimi’s first session with Billy and Buddy from May of 1969. In the film Jimi Hendrix, “Hear My Train” is played slow on a 12-string acoustic and sung so sadly that you can actually see a tear on Jimi’s face as he sings. This version is not only electric and taken at a faster pace than normal, but it’s an angry song, this time with a killer solo. “Bleeding Heart” is nice and raw and has a VERY different arrangement than he ever performed live. “Let Me Move You” was recorded with saxman Lonnie Youngblood, who released a couple singles with a pre-Experience Jimi Hendrix on guitar. It’s nothing more than an old-school soul jam except the guitar is way more out front. It’s a decent track, but doesn’t really fit in with the sound of the rest of the album. “Izabella” and “Easy Blues” are rare studio recordings by the Woodstock band (Jimi, Billy, and Mitch Mitchell with Larry Lee on second guitar and Jerry Velez and Juma Sultan on percussion). This version of “Izabella” is now the earliest known recording of the song, while “Easy Blues” is actually a nice jazzy instrumental (previously released in edited form on Nine to the Universe).

This version of “Crash Landing” has Jimi and Billy with what is essentially a pickup band. It sounds more like a work in progress than anything else on the set and contains many elements of what would become “Dolly Dagger.” “Inside Out” may have been heard by hardcore collectors, but not in this quality. It was originally cut with just Jimi on guitar and Mitch Mitchell on drums, then Jimi added bass and a guitar overdub through a Leslie. It’s a great tune and it’s always exciting to hear Jimi’s bass playing as well. “Hey Gypsy Boy” is very closely related to “Hey Baby,” and may have been an early version. On this cut, Jimi’s whammy bar work is quite interesting and not his standard dive-bomb approach. “Mojo Man” was actually a Ghetto Fighters tune, recorded at Muscle Shoals. Jimi laid down a couple guitar tracks on top of the existing mix for this track. Kudos to Eddie Kramer for grafting guitar parts on to a fully mixed tune and making it sound great (he really did a spectacular job on this entire set). It’s a hot tune with nice syncopated horns, improved by Jimi’s addition. The album closes with a brief studio take on “Villanova Junction Blues.”

People, Hell and Angels certainly isn’t the place to start your Hendrix collection, but collectors will surely want to hear this and it provides an interesting perspective on where Jimi’s music was headed post-Experience. ― Allmusic