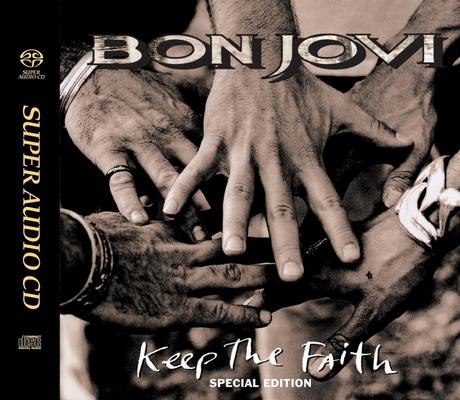 Keep the Faith is the fifth studio album by American rock band Bon Jovi, released on November 3, 1992 by Mercury Records. It is the last album to feature original bass guitarist Alec John Such, before his dismissal from the band in 1994. It is Bon Jovi’s first album since 1985’s 7800° Fahrenheit not to be produced by Bruce Fairbairn. It was also their first album to have a title track. The album was produced by Bob Rock and was recorded at the Little Mountain Sound Studios in Vancouver, Canada. Keep the Faith represents the beginning of a new chapter in the history of Bon Jovi, marking a change of both the band’s image and sound. Moving away from their early glam metal roots in previous albums, it introduced a more “rock n roll” driven groove to Bon Jovi’s sound. The album turned away from heavy drums and wild guitar solos, but instead introduced a new sound of Bon Jovi which consisted of piano ballads and long epic guitar solos.