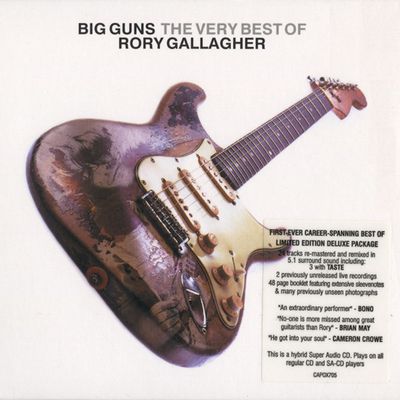 The compilation Big Guns: The Very Best of Rory Gallagher is one of the ways assembling a retrospective should be done. This set offers a portrait of a true guitar hero and songwriter, one whose flash never outweighed his substance, one whose work is so utterly and dazzlingly fresh it not only stands the test of time, but transcends it. Being an Irish bluesman was tough for Gallagher, especially when he began his career in the 1960s. When he passed away in 1995 at the age of 47, he left behind 17 albums and a legacy of hard traditional blues and big, knotty blues-rock. These two discs are the first retrospective to span the entire length of his career, from his time with the power trio Taste to his signature albums like Calling Card and Deuce, through to his final acoustic album, Wheels Within Wheels (released posthumously). There are many gems here beginning with “Born on the Wrong Side of Time” by Taste, and unreleased live versions of the traditional “Bullfrog Blues” and Junior Wells’ “Messin with the Kid.” The stone killers are cuts that Gallagher’s fans recognize him for, such as “Tatoo’d Lady,” the title number from Calling Card, or “I’m Not Awake Yet” from Deuce. There are also fine moments from later in his career as well, such as “Kickback City” from Defender and “Bad Penny” from Top Priority (though it would have been better if the compilers had picked “Philby” or “Follow Me.”) “Sinner Boy” is here from Taste’s Live at the Isle of Wight, along with “What’s Goin’ On” (not the Marvin Gaye tune). While fans may quibble about individual selections, the only glaring omission is the absence of the stellar “Walk on Hot Coals.” The package is fine enough with numerous autobiographical quotes from Gallagher, a slew of good photos, and a good liner essay by David Sinclair. While it may be the tried and true devotees that seek this out ultimately, the music listener who would most benefit is the one interested in the evolution of blues or in fine guitar players. For the latter, Big Guns would be nothing short of a revelation. ― Allmusic