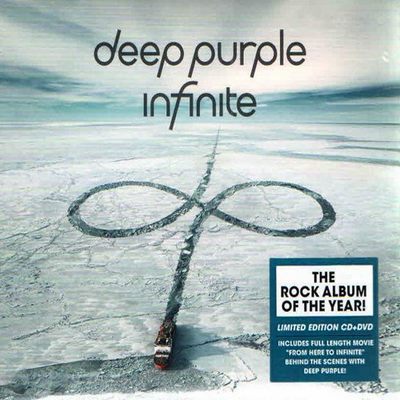 No one, least of all Deep Purple themselves, expected the success of 2013’s Now What?! It placed at number one on four European album charts and in the Top Ten of six other countries. It also sold exceptionally well: It was certified Gold in Poland, Germany (where it sold over 100,000), the Czech Republic, and Russia — it was the band’s first album to crack the U.K.’s Top 40 charts in 20 years.

For InFinite, Deep Purple re-enlisted producer Bob Ezrin. At this point, he is almost a sixth member. This the longest running lineup in their history. InFinite is a heavier and more expansive record than its predecessor, but it’s not as consistent. Ian Gillian is in excellent form — still possessing intense expressive power and range, his falsetto remains intact four decades on. Don Airey’s organ and keys — so elemental in DP’s musical architecture — is physical, atmospheric, and dynamic. He and guitarist Steve Morse combine brute force with imagination and finesse. Ian Pace, who had a mini-stroke last year, seems to have recovered fully. Roger Glover remains a bassist whose musical signature is so dominant it is only rivaled by Black Sabbath’s Geezer Butler.

Things get off to a great start with “Time for Bedlam.” Despite its slightly corny sci-fi spoken intro with Gillian’s voice put through a processor, it acquits itself with a massive swirling charge worthy of the band’s glory years. It also features Gillian’s best lyrics — he tends to go over the top elsewhere. It’s followed by the commanding blues-rock boogie of “Hip Boots,” where Gillian’s swagger rises above a biting mix of snare, kick drum, and dual leads from organ and guitar; but it’s actually Glover who drives the tune. On tracks such as “All I Got Is You” and “The Surprising,” this outfit doesn’t let the listener forget they’re the same band who delivered “Child in Time” and “When a Blind Man Cries.” The latter is downright prog as it melds power ballad to metal in a gorgeous mix that includes wonderfully layered backing vocals and Airey’s neo-classical keys that evoke the memory of Jon Lord. While the musical attack in “One Night in Vegas” is righteous (complete with a pumping barrelhouse blues acoustic piano woven into the hard rock bombast), Gillian’s lyrics are bloated with excess. Somehow, though, it doesn’t really matter; his singing is so commanding atop the band’s sass and strut, it’s enjoyable regardless. “On Top of the World” has the craziest Gillian lyrics ever, but again, DP’s crunchy choogle carries them to the finish line. The evocation of vintage psychedelia and Led Zeppelin in “Birds of Prey” makes it one of the more compelling tunes here. Unfortunately, there are two clunkers that sound like filler: the terribly clichéd “Johnny’s Band” and a perfunctory read of the Doors’ “Roadhouse Blues.” Otherwise, InFinite is a winner; it proves not only that Now What?! was no fluke, but that Deep Purple, even at this stage, still have plenty left to offer musically and creatively. ― Allmusic