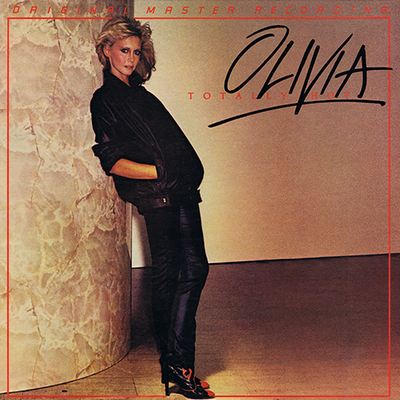 Totally Hot is one of the most fun albums from Olivia Newton John. Total abandon is its trademark, the atmosphere lightened up a bit, and from top to bottom it is one of her most satisfying projects. “Please Don’t Keep Me Waiting” is a girl group all grown up. Is it Newton-John’s voice or Michael Botticker’s synthesizer at the end of the first track? A little jarring for her country audience, but she takes care of them on “Dancin’ ‘Round and ‘Round,” a wonderful country-pop tune and quick about face. As with the Let Me Be There release, her name is prominently splashed on the cover and the tan background suits her well, with the mysterious look with the kerchief on the inside cover as playful as the music. David Foster, Steve Lukather, and Tom Snow add their talents to the project, but it is Newton-John, with the guidance of John Farrar, who really shines here. Her own “Talk to Me” is bouncy adult contemporary, but it is the two hit singles which, naturally, stand out. Tom Snow’s “Deeper Than the Night” was a nice musical departure for the singer, with its strong piano reflecting the melody. Along with the John Farrar smash “A Little More Love,” those involved showed that Olivia Newton-John could move beyond the three huge hits from the film Grease which saturated the airwaves in 1978. “A Little More Love” went Top Three in December of 1978, with “Deeper Than the Night” hovering around the Top Ten in May of 1979. The album contains a nice balance, something missing from 1985’s Soul Kiss. “Borrowed Time” is more country-pop and is one of the more serious tracks on the album. The cover of Spencer Davis Group’s “Gimme Some Lovin’,” on the other hand, is as close to a drunken party as one will get on a Newton-John album. Jimmy Miller, producer of the original 1967 hit, would probably approve of the spirit — it is definitely more fun than the Blues Brothers’ version which charted three years after this. John Farrar actually pens three songs in a row on Totally Hot, including the title track, and with Newton-John’s two contributions, the songstress and her producer compose half of this album. That the prolific John Farrar didn’t contribute more to these albums shows how careful they were about material, but “Never Enough” is stunning, and maybe Newton-John will take on the Marvin, Welch, & Farrar songbook sometime in the future. The precision on the verse and chorus make for a beautiful album track, lyrics that flow perfectly on the singer’s voice. The title track is funky and the big mistake on this disc is that Dr. John isn’t performing a duet with Newton-John on this New Orleans adventure. The cover of Eric Carmen’s “Boats Against the Current” is a nice feather in his cap. It’s a dramatic reading that shows the other side of this recording. The Olivia Newton-John catalog runs deep, and Totally Hot is one of the more consistently entertaining albums in the collection. ― Allmusic