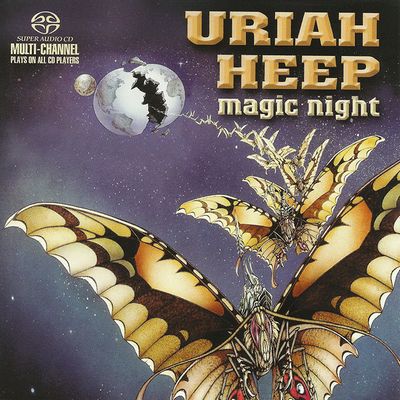 This is the stunning film & recording of Uriah Heep live in concert at the Astoria Theatre, London on November 8th 2003, featuring a glittering array of hits and special guest appearances by former Heep vocalist John Lawton and Heather Findlay of Mostly Autumn. This is the definitive proof that in the 21st Century Heep keep on rocking stronger than ever. Uriah Heep’s by-the-books progressive heavy metal made the British band one of the most popular hard rock groups of the early ’70s. Formed by vocalist David Byron and guitarist Mick Box in the late ’60s, the group went through an astonishing number of members over the next two decades — nearly 30 different musicians passed through the band over the years. Byron and Box were members of the mid-’60s rock band called the Stalkers; once that band broke up, the duo formed another group called Spice. Spice would eventually turn into Uriah Heep in the late ’60s, once Ken Hensley (guitar, keyboards, vocals) and bassist Paul Newton joined the pair. Former Spice drummer Alex Napier was the band’s drummer for a brief time; he was quickly replaced by Nigel Olsson. ― Amazon